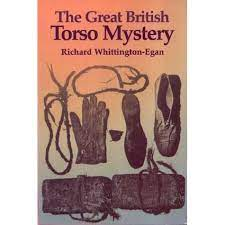 Today, for once, my forgotten book is a work of non-fiction. I first came across the name of Richard Whittington-Egan about forty years ago, when I started work in Liverpool. A local man, he'd published a number of books about his native city, and I later discovered that he was also an expert in true crime. I never met him, but we were in touch in the later years of his life, when he was living in the south west with his wife and literary collaborator Molly. He kindly read and commented on the manuscript of my novel Dancing for the Hangman and he told me about a book he'd written called The Great British Torso Mystery, which I duly acquired. Richard died in 2016 but I've recently reread the book, which is the only full-length study of a case that was, in its day, very high profile.

An unidentified and mutilated human trunk was discovered on the banks of the River Severn, not too far from Cheltenham, in 1938. The incident, and the mystery surrounding it, became a sensation. It was dubbed, rather wonderfully if not quite accurately, 'The Case of the Thousand Clues'. The legendary pathologist Bernard Spilsbury was consulted, but the torso was never definitively identified. It seems very likely, however, that it belonged to an individual called Captain William Butt.

A related discovery was made even before the torso was examined. A gigolo called Brian Sullivan was found to have gassed himself. He was an associate of Captain Butt, who had engaged the services of Sullivan's mother, Nurse Sullivan, to look after his mentally troubled wife. Butt, like Sullivan, was an unscrupulous fellow, and the nurse was also a strange character; her role in the story is important, but open to interpretation.

Did Barry Sullivan kill Butt and try to disguise the crime by mutilating the body? If so, why? If not, what really happened? A detective novelist of the day, Andrew Soutar, investigated on behalf of the Daily Mail, and although his reporting prompted a libel suit from Nurse Sullivan, perhaps his veiled hints that she was involved in the death of Butt were not too far off the mark.

It's a case that I find intriguing in various ways and Richard's treatment of it is interesting. The book was published by a small press, and I do feel that it would have benefited from stricter editing. All the same, it's an interesting piece of research and the case is so extraordinary that I'm surprised that it isn't better-known.

Had not heard of this case, but by coincidence, I just finished rereading Rupert Penny's 1939 She Had to Have Gas, the most complicated and over-the-top of his Inspector Beale series. Published a year after the Cheltenham torso murder, it features not one but two torsos - of attractive women (& which carcase is whose?). Both had head & hands lopped off (& feet also), and autopsy evidence of suffocation by gas is also involved. Seems very likely to me that this novel was Penny's shot at a roman a clef. Is She Had to Have Gas mentioned by Whittington-Egan?

It isn't mentioned, Art. But I'm very interested in this connection and I think I have a copy of the book which I haven't read. So thanks to you, it has shot up the Everest that is my TBR pile!

I'll be curious to learn your response to Gas. Besides torsos and gas, one of the characters is a successful mystery novelist, who offers some interesting observations about the craft of mystery writing, the dodges and cliches, and the economics of cranking out whodunits for a living.

Right, Art, I've found my copy and I shall give it a go in the very near future!

This is a classic British murder case I've not heard of so I'll keep a look out for a copy. Richard Whittington-Egan wrote the classic true crime book previously mentioned on your blog The Ordeal of Philip Yale Drew. I'm still hoping the related book Death to the Rescue by Milward Kennedy will be reissued