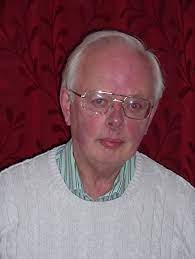 I was truly sorry to hear of the death of Robert Richardson, who – uniquely – served two distinct terms as Chair of the CWA. He also gave a great deal of support to Nancy Livingstone, whose stint as Chair was marred by serious illness. I was friendly with Robert and his charming wife Sheila for upwards of thirty years, and on the last occasion that we met, at a northern chapter lunch in Yorkshire shortly before the pandemic changed all our lives, I had the pleasure and privilege of presenting him with a Red Herring award in recognition of his distinguished service to the CWA and its members over the decades.

Robert was a journalist who moved from writing whodunits featuring an amateur sleuth to novels of psychological suspense. His first crime novel, The Latimer Mercy (1985), won the John Creasey Memorial Award for the best debut of the year. Firmly in the classic detective story tradition, it benefited from a cathedral setting (in Vercaster, a fictionalised St Albans), and an amateur detective who rejoiced in the name of Augustus Maltravers. Maltravers, a playwright, is an intelligent and likeable character, but three years passed before he returned and the mood in Bellringer Street (1988) is bleaker than in the first book. The Book of the Dead (1989), set in Cumbria, contains a lengthy – and well-wrought - Sherlockian pastiche. Memories of ‘Silver Blaze’ and the dog that did not bark in the night-time point Maltravers towards the solution to a murder mystery and help to prevent another killing.

Maltravers appeared in three more novels before Robert published The Hand of Strange Children (1993), a book nominated for the CWA Gold Dagger. He blended extracts from news agency reports detailing the discovery of two bodies in a wealthy banker’s house with flashbacks so as to build considerable tension. Significant Others (1995), in which he made use of his knowledge of the newspaper industry, and Victims (1997), are also entertaining stand-alone novels.

After that, however, Robert produced no more mystery novels, a real shame, but I continued to see him regularly at CWA events, including our penultimate encounter, at the Lake District conference in 2019 when I came to the end of my own long run as CWA Chair. He presented me with a bottle of wine, ostensibly as a competition prize, but I suspect mostly just as a generous gesture of goodwill. He spent many years tormenting me gently about the misfortunes of Manchester City and in recent years he took it in good part when I retaliated as City gained the upper hand over their rivals, his beloved Man Utd. He had a fund of anecdotes and was a sparky character. I'll miss him.

Labels: Augustus Maltravers, Robert Richardson, The Book of the Dead, The Hand of Strange Children, The Latimer Mercy

so sorry to hear RR is gone. I got to know him slightly in Nottingham, first at Shots on the Page in 1994 and again the following year for Bouchercon, and he also visited Helsinki for a crime fiction seminar in the late 90s, when his trio of standalones were translated into Finnish - btw. I still think The Hand of Strange Children is one of the best crime novels of that decade. Totally agree with your sentiment that it was indeed a pity he stopped writing in this genre after Victims. STTL, Robert.

Thanks for this. Yes, very sad.