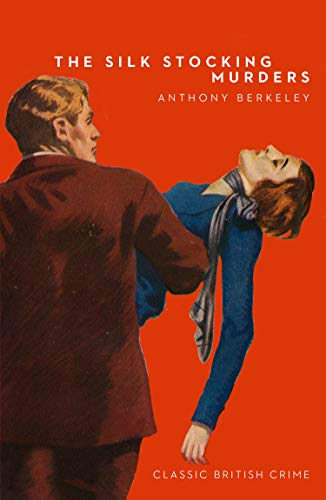 I first met Tony Medawar way back in 1990 when we both attended the London Bouchercon and both took part in a Mastermind quiz. We've been friends ever since. Tony was particularly busy last year and this post seeks to round up some of his achievements. In addition to being Director of the International Agatha  Christie Festival in Torquay - a very enjoyable event which I was delighted to participate in, and well worth keeping in mind for this September - he continued his researches into Golden Age fiction, while a number of books published by HarperCollins featured his introductions.

Like Tony, I am a long-time Anthony Berkeley fan, so I was glad to see the reappearance of The Wychford Poisoning Case and The Silk Stocking Murders, two novels from the 1920s which feature Roger Sheringham. Tony has also superintended the publication of The Wintringham Mystery, which was the original title of the story later published under the pen-name A.Monmouth Platts as Cicely Disappears. This is an exceptionally rare book. I was loaned a pristine, dust-jacketed copy by a member of the author's family (and looked after it very carefully, believe me, before sending it back) and reviewed it on this blog a few years ago. It's fair to say that I don't rank it anything like as highly as the Sheringham novels. But now there is an affordable paperback edition, fans can judge for themselves.

Tony has also edited the fourth anthology of stories in his Bodies from the Library series. Bodies from the Library 4 may not have an unexpected title, but it contains some genuine rarities that will make the mouths of many a Golden Age fan water. There are, for instance, stories by both Edmund Crispin and Ngaio Marsh that have never been published before.

The other ingredients form quite a mix. There are a couple of radio plays and a sequence of six short mysteries by authors including Peter Cheyney which first appeared in the Sunday Dispatch. The highlight, and one which I think will make this book a must-buy for some traditional mystery lovers is a novella by Christianna Brand, 'Shadowed Sunlight', which has again not been available until now. My own favourite is Crispin's 'Child's Play', a dark and uncharacteristic but memorable story. It doesn't feature Gervase Fen, and maybe that was why it never saw the light of day in Crispin's lifetime, but I'm extremely surprised he seems not to have managed to get it published.