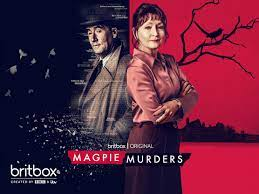 I read and enjoyed Anthony Horowitz's Magpie Murders not long after its original publication. I was even more taken with the follow-up title, Moonflower Murders, which is quite excellent. So I was looking forward to the TV version of the first book in the 'Susan Ryeland' series, anticipation enhanced when I discovered that Horowitz himself was taking responsibility for the adaptation.

I certainly wasn't disappointed. On the contrary, I enjoyed the TV version even more than the book. Although the same man wrote both versions of the story, I felt that his use of the flexibility of television worked to the story's advantage. It also helps that Horowitz is even more experienced in the field of screenplay writing than he is as a detective novelist. Here he is on the top of his game. There is a slight dipping of tension in the fifth of the six episodes, as the pieces of plot are manoeuvred around the chessboard, but everything comes together quite triumphantly in the final instalment.

Horowitz benefits from a first-rate cast and the sort of high production values that ensured the long-term success of Inspector Morse thirty-five years ago. Susan, for instance, is played by Lesley Manville, who does a very good job. Michael Maloney is also good as her publisher boss. Lately I've been watching old episodes of that great comedy series The Brittas Empire, so I was very pleased to see Pippa Haywood, who played Gordon Brittas' wife Helen, taking on not one role here but two.

The novel features a 'book within a book' but in the screenplay, the two stories are intertwined, a method that works extremely well, with some of the same actors appearing in both. It's all very clever, but because Horowitz is such a skilled craftsman, the cerebral plotting never becomes turgid. The location filming in lovely parts of Suffolk is the icing on the cake.

Yes, I agree, my wife & I both thought it was excellent. I've read the book but hadn't really remembered much (a regular failing, I'm afraid!) so it was like watching something new anyway. I've got 'Moonflower Murders' in my 'to read' pile but the length is a bit daunting, so I might just wait for BritBox to adapt that as well!! (As an aside, Magpie Murders reminded me a bit of a lost ITV play from the mid-eighties called "Murder by the Book", with Peggy Ashcroft as Agatha Christie and Ian Holm as Hercule Poirot - there's a cast for you! - which played around with the author/character relationship in a very amusing way. What we'd now call 'meta', I suppose. It's not totally lost, someone has uploaded it to YouTube in 4 chunks - worth seeking out even if the picture quality is a bit iffy.)