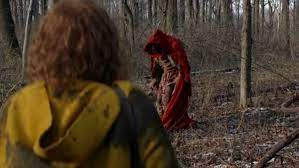 The Village is a film written and directed by M. Night Shyamalan dating back to 2004. When it was first released, it did well at the box office but caused some controversy. This was because Shyamalan had made his name with horror movies that boasted a spectacular final twist and there was a feeling among critics such as Roger Ebert that this time the 'twist' was a dismal let-down. In recent years, there's been some re-evaluation of the movie and I go along with the view that the negative reaction was more about the critics' expectations than the quality of the film.

Because there is indeed a major twist - arguably, a double twist - in this film, I need to express myself cryptically if I'm to avoid spoiling it. And I do want to avoid spoilers because this is a film worth watching - and perhaps, like Midsommar, worth watching again once you know what the director was trying to do.

The village of the title is in Pennsylvania, and it's home to a small and very isolated community. Their dress, way of talking and customs are all highly traditional. This isn't an Amish community, but it has something of the old-world feel of Amish life so memorably presented in the Harrison Ford film Witness. The Chief Elder is Edward Walker, played by that fine actor William Hurt and he has a beautiful blind daughter, Ivy Elizabeth, played by Bryce Dallas Howard, who falls for Lucius Hunt (Joaquin Phoenix), son of Alice Hunt (Sigourney Weaver). From the names I've mentioned, you can see that it's a stellar cast, supported by Adrien Brody, who plays Noah, a disturbed young man who fancies Ivy.

The village is surrounded by Covington Woods and there's a great deal of fear about mysterious creatures believed to live in the woods. The creatures wear red garments and red is a feared colour; a sort of mustardy yellow is a 'safe' colour. There are watchtowers and brightly lit lanterns, all part of the scheme to keep the creatures - said to have a 'truce' with the villagers at the moment - at bay. The Elders have their secrets, some of which appear to be locked away in mysterious boxes. What is going on?

I enjoyed this film and although it didn't develop in the way I expected, I think that Shyamalan does a very good job in entertaining the viewer, so long as one doesn't allow oneself to be swayed by preconceived ideas.