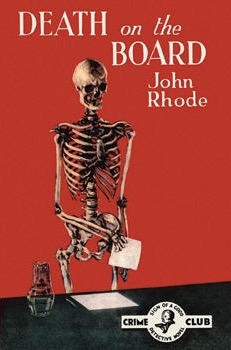 John Rhode's Death on the Board, known in the US as Death Sits on the Board, was first published in 1937, during the period when the author was at the height of his powers of invention. It's an elusive book and I'm indebted to a kind person who presented me with a collection of Golden Age mysteries, so that I had a chance to read this one (a paperback edition, not the first with the wonderful dust jacket pictured above). It's a story of multiple murder and it illustrates Rhode's strengths and weaknesses as a detective novelist.

As regards strengths, he had a flair for dreaming up ingenious methods of murder. I don't have the scientific or practical expertise and know-how to judge how credible some of his killer's schemes are, but he's usually able to persuade his readers that the murderer's m.o. is viable, always assuming a criminal with an intricate turn of mind. The crimes in this novel are very cunningly conceived. There is also some interesting social history - this book is set in an era when ironmongers like Porslin were the super-capitalists of the day.

As regards weaknesses, stodgy prose is a recurrent feature of his writing, and we certainly find ourselves on the receiving end here. The story begins with a bang, when the chairman of Porslin Ltd dies in a mysterious explosion which is put down to accident. But we then get a laborious account of relationships on the corporate board, and touches of bathos. Chapter four, for instance, ends with one character saying, 'And who'll take his place when he retires is more than I can say. Well, perhaps I'll retire myself then, and so it won't matter.' Hardly a cliffhanger. This is a tiny point, but it's typical of Rhode's literary style, and cumulatively it does become rather dull. The plain writing style contrasts with several melodramatic and unusual deaths.

When a second director of the company dies, supposedly in an accident, but again in very mysterious circumstances, the police aren't even called in. I found this hard to believe, to say the least. Only when a third director bites the dust does anyone make a serious attempt to join the dots.

In terms of murder motive, Rhode plays fair with his readers, thankfully, but this does mean that it's as easy to figure out who is responsible for the murders and why as it is difficult to figure out the mechanics of precisely how the crimes were committed. Young Inspector Waghorn gets on to the right track in terms of identifying the culprit, but gives up on it too soon. It's because I'm much more interested in human behaviour and motivation than in engineering and practical science that I find Rhode's fiction agreeable in small doses but falling short of the highest level in terms of Golden Age detection. Despite these caveats, I was interested to see how he went about the task of developing his story. Overall, this book is one of the better Rhodes that I've explored.