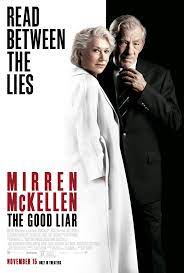 I was drawn to The Good Liar, as I guess many people will be, by the fact that the cast is led by Helen Mirren and Ian McKellen. And the first thing to say about this relatively recent (2019) film is that both are in very good form here, especially Mirren. The script by Jeffrey Hatcher is based on a novel by Nicholas Searle which I haven't come across.

The set-up is apparently simple. A woman and a man in the autumn of their lives sign up to a dating agency. They seem to have a good deal of chemistry, but it soon becomes clear that Roy Courtnay (McKellen) is not all he seems. Russell Tovey, introduced as Mirren's grandson Steven, makes clear his suspicions but Mirren (Betty McLeish) brushes them off.

Courtnay is a con man with considerable expertise in fleecing people out of large sums of money. It also emerges that he is very ruthless. His partner in crime is Vincent (Jim Carter, yet another appealing actor). We fear for Betty, but we also know that Mirren generally plays strong women. So what is going to happen?

There are plot twists that upend the viewer's expectations. Not all of them are adequately foreshadowed in my opinion (though perhaps I need to watch the film again to see if that really is a fair judgment) but they are certainly striking. As a result, the story changes direction rather abruptly and this isn't entirely satisfying. Overall, though, it's a good film with a number of enjoyable moments as well as several first-rate performances.