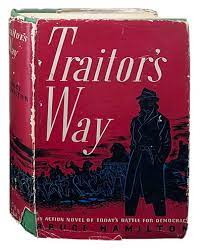 Traitor's Way by Bruce Hamilton was published in 1938 in Britain and in the US in the following year. It's a lively manhunt thriller, very much in the tradition of John Buchan's The Thirty-Nine Steps. I found it a fast and easy read, but this is a book that has hardly ever been discussed, though it receives one or two glances in books about spy fiction.

One reason for this neglect may be Bruce Hamilton's lack of celebrity. For instance, his early novels Hue and Cry and Middle-Class Murder are also elusive. But it's also true that the political premise on which he based the plot was rendered absurd shortly after the book was written and I guess publishers would think that this made a nonsense of his story.

I'll try to discuss the book without giving too much away - not an easy task. The ten chapters have short, snappy titles, such as 'Fracas' and 'Conspiracy', and this is in keeping with the writing style - this is Hamilton at his paciest. The story is told by Noel Mason, an ordinary individual, who starts out as 'an entirely non-political person' but finds himself caught up in a web of political intrigue, and a game played for very high stakes indeed.

This is an anti-Fascist novel, featuring a charismatic chap called Greatorex who leads something called the Order of British Chivalry. Not that they are at all chivalrous in practice. Poor Mason ends up committing a crime and he finds himself in Dartmoor. But when the chance to escape arises, he grabs it...

I enjoyed this story, even though it's not in the Buchan class and I felt it showed Hamilton's naivete about politics. What happens in his story is very, very different from what actually happened in the world a year or two later. He wasn't much of a crystal ball gazer. But at his best, he could tell a good story.

Bruce Hamilton seemed to live his whole life under the shadow of his younger brother Patrick Hamilton-author of the novel Hangover Square and the stage plays Gaslight and Rope famously filmed by Alfred Hitchcock.He was devoted to his brother and tried to help him through his sad decline into alcoholism but after his brother`s death his papers indicated he felt somewhat resentful that his brother`s reputation always loomed large in his own life.

Absolutely. Theirs was a fascinating relationship, well charted in two biographies as well as Bruce's own bio of Patrick.