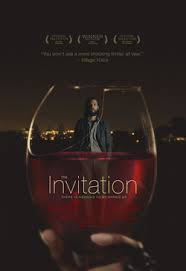 The Invitation is a 2015 horror film directed by Karyn Kusama which earned a certain amount of critical acclaim. I have mixed feelings about it, but it's intriguing and - in some respects  - unpredictable. At the start, Will and his girlfriend Kira are driving to a dinner party in the Hollywood Hills when they run over a coyote. Will kills the luckless animal to put it out of its misery, and I thought this was a rather clumsy piece of foreshadowing. But the film develops momentum once they arrive at the party.

They have been invited to the party by Will's ex-wife Eden and her new husband David. A number of other friends have also been invited; it's the first time they have seen Eden and David for a couple of years. It emerges that Will and Eden previously experienced tragedy: the death of their young son. And the atmosphere at the party is distinctly unsettling.

The other guests include a strange woman called Sadie and a man known as Pruitt. Will becomes unsettled, especially when David locks everyone inside the house. A video featuring a dying woman receiving comfort is shown and this upsets another guest, Claire, who decides to leave. When Pruitt follows her out, Will's unease increases.

The tension is built up skilfully, but I thought it dissipated in the later stages of the film as subtlety is abandoned and the body count rises. The final scene has attracted much comment, and quite a lot of admiration, but it didn't work for me; to explain why would be a spoiler. There are some interesting ideas in this film, but for me the storyline was not so much pleasingly ambiguous as - in some respects - verging on incoherence. The fact that there were so many guests at the party meant that the characters weren't fully developed, and as a result I didn't care about their fate as much I should have done. Not bad, but no masterpiece.

Agreed. Tara and I watched this years ago, and you hit on many of the same things we thought about as well.