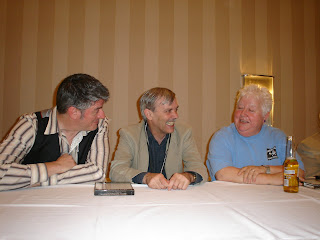 I’m lucky to have an excellent US publisher, Poisoned Pen Press, and one of the highlights of Bouchercon was the richly deserved Lifetime Achievement award given to Barbara Peters and Rob Rosenwald, the presiding geniuses behind PPP and the legendary Poisoned Pen Bookstore in Scottsdale, Arizona. They have long been huge supporters of my writing and seeing them again was one of the highlights of my trip.

At the opening ceremony of Bouchercon last Thursday night, the award was presented to Barbara and Rob by Val McDermid and, to my surprise and pleasure, I found myself up on the podium as well, along with Martyn Waites, presenting the Fan Guest of Honour award to Britain’s own Thalia Proctor. The other guests of honour included Baltimore’s own Laura Lippman, and Britain’s John Harvey, while Mark Billingham was a very accomplished Toastmaster.

The photo of Martyn, Val and me at the awards ceremony was taken, and kindly emailed to me yesterday, by that great crime expert Ali Karim (whom I first met at the Bouchercon in Las Vegas a few years back, although it turns out that he lives not far from me in Cheshire.)

Later on Thursday evening, Barbara and Rob hosted a party for PPP authors in the Sheraton Hotel’s rather impressive Presidential Suite up on the 27th floor. This gave me the chance to catch up with a fellow Brit, Kate Charles (we also share a UK publisher, Allison & Busby) as well as to talk to a variety of PPP authors I’ve never met before, such as Robin Burcell.

Also at the party was Joni Langevoort, who is on the board of Malice Domestic, a Washington-based convention focusing on the traditional mystery. I met Joni on my first visit to Malice a couple of years back, and it was good to recall the fun I had on my one and only visit to D.C.