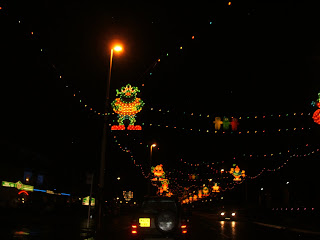 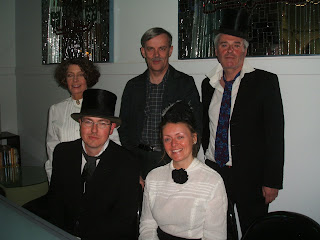 Thursday evening saw my last event of 2008, other than panels at Bouchercon next week. Blackpool Central Library was the scene of another version of 'Who Killed George Hargrave?' and, despite a night of driving rain, the audience packed the room to capacity.

After the event was over, with the rain continuing to fall, I drove back along the Promenade, past the famous Tower, and through the Illuminations. A visit to Blackpool Illuminations was a treat when I was young, and to this day the resort ploughs a vast amount of investment into prolonging the holiday season with ever-changing Illuminations. But of course they are seen at their best in reasonable weather - in short supply this autumn.

Blackpool would be a terrific place in which to set a thriller (I recall Val McDermid describing Las Vegas to me as 'Blackpool without the beach'.) It's been done before, of course, and a book called Candyfloss Coast by Barbara Crossley, a charming person who lived near Blackpool and whose crime writing career was regrettably short, comes to mind.

I've staged the Victorian Murder Mystery in a variety of intriguing places this year, including my home library of Lymm. There were truly enjoyable visits to places like Wallasey and Ashton, as well as a tour of the North East in spring. Perhaps the most perfect setting for the event was the Lit and Phil Library in Newcsstle - an amazing venue.