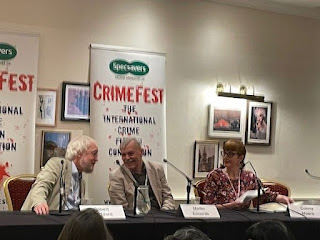 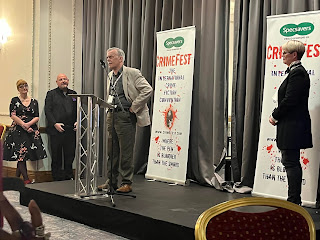 I've just returned from a brilliant weekend in Bristol at CrimeFest 2022. Along with Ann Cleeves, Andrew Child, and Robert Goddard, I was a guest of honour. A huge privilege. When I attended the inaugural CrimeFest fourteen years ago, I never imagined this level of recognition; as things have turned out, over the years, CrimeFest has been the scene of plenty of magic moments in my personal crime writing journey. Incidentally, one of the benefits to me of this blog is that some of the detail in the older posts reminds me of great times from the past - as with that 2008 festival. Huge thanks go to Adrian Muller and Donna Moore for all their hard work. They are supported by an excellent team of volunteers and others, including sponsors, and it was great to hear from Dame Mary Perkins that Specsavers intend to sponsor CrimeFest for at least the next three years. And I was presented on stage with a lovely Bristol Blue glass vase as a memento of the occasion. 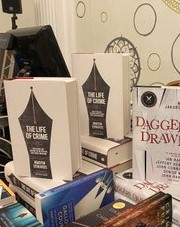 It was thrilling to go into the bookroom and see, for the very first time, a pile of copies of The Life of Crime. And it was even more thrilling to sign copies and see, on the final morning, that every copy on the bookstall had been sold. HarperCollins kindly gave me the chance to invite some old friends to a drinks do (not an actual launch, since the book is technically not published until 26 May) and how pleased I was to spend time with the likes of Simon Brett, Ruth Dudley Edwards, Felix Francis, Cath Staincliffe, Chris Ewan, Robert Goddard, Michael Ridpath, and Linda and Gary Stratmann (special thanks to Gary for acting as event photographer!) among others. Afterwards, HarperCollins hosted a small group of their authors at a private dinner; it was a particular pleasure to sit next to Jane Shemilt, whom I hadn't met before. The previous night I'd had dinner with a group of friends - Kate Ellis, Christine Poulson, and Cath Staincliffe (who was about to learn that she's been shortlisted for the Dagger in the Library) - and I also had a pleasant lunch with Ann Cleeves - as well as coffees with various other friends and fellow authors. 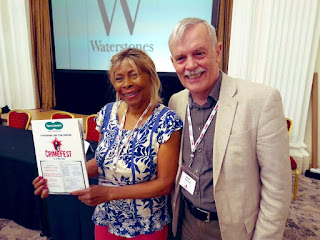 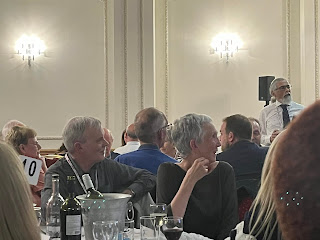 A major highlight came when Donna interviewed Robert and I as Diamond Dagger winners from 2019 and 2020. This was great fun, not least because I've been a fan of Robert's writing for many years. I moderated a panel, 'Suspect Everyone', with Rachael Blok, James Delargy, Victoria Dowd and David Hewson and also took part in a Golden Age panel moderated by Simon Brett, together with Janet Laurence, David Brawn, and TV's Barry Ryan (who made some insightful points about Golden Age stories on television). 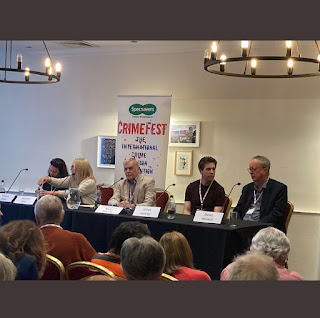 There's never enough time to chat to all one's pals at these events, because the time whizzes by so fast. For instance, I only got a chance to catch up with Yrsa Sigursdottir on my way out of the hotel to catch the train home, but I did enjoy seeing Dolores Gordon-Smith, whom I first met way back at that 2008 CrimeFest as well as Joyanna Lovelock (pictured above), who interviewed me a while back for her podcast. It was a weekend that will stay in my memory for a long time. And as an added bonus, I went to a second hand bookshop in the market and found a rare signed Golden Age mystery for a very modest price. Lucky? You bet.
Posted by Martin Edwards

It was a marvellous weekend and so good to catch up with so many old friends! The new book is an absolute must have - I’ve started reading and it’s terrific! Brilliant weekend, Martin, and really nice to see you again
Xx