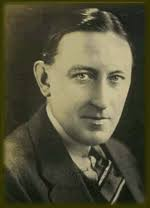 Seeing your first novel for the first time, holding the reality of it in your hand, is a special moment. So spare a thought for Russell Thorndike, back in 1915, when he received his copy of his debut, Doctor Syn. On the front cover, spine, and title page, his surname was spelled Thorndyke, as if he were connected to Austin Freeman's great detective. It must have been an excruciating experience, though I understand that the book was popular enough to earn an early reprint, and the error was then corrected. (Thorndike, pictured, was wounded in the Gallipoli campaign, so I wonder if some time passed before he laid his hands on his novel - if so, it probably didn't help his recovery to full health, but the good news is that he did live until the ripe old age of 87).

The sub-title is A Tale of the Romney Marsh. It's a historical story, set in the late 18th century, and to do with smugglers. Not my usual sort of thing, to be honest. However, I was attracted by the chance of seeing a first edition which featured an inscription to Charles B. Gilbert - 'here's to the feet that have walked the plank'. It turns out that this is a quote from a smugglers' drinking song which features more than once in the story.

My interest in the book was quickened by visits to Dymchurch and Romney Marsh after taking part in a couple of Rye Festivals. The Marsh is a fascinating part of Kent, previously unknown to me, flat (as you'd expect) yet certainly not lacking in character or atmosphere. I felt sufficiently intrigued to consider using it as a setting, either for a short story or perhaps scenes in a Rachel Savernake novel. Right now, the latter is quite a likely option.

What of the story? Well, it's a readable yarn, and the spookiness of the Marsh is well conveyed and places an important part in the story. Even though it's not the sort of book I'd usually read, I can understand why it became a success - so much so that it gave rise to three films a whole raft of prequels. Thorndike, who like his more famous sister Sybil had started out as an actor, focused increasingly on authorship and he was also involved with Six Against the Scotland Yard, perhaps his closest brush with conventional mystery fiction.

Hi Martin, thank you for this review. I was a boy when Disney debuted The Scarecrow of Romney Marsh on television. Patrick McGowan played the good vicar who donned a scary costume and rode through the marsh at night on behalf of the poor. The theme song was fantastic! Look for the opening sequence on YouTube.

Bruce Graeme's "And a bottle of rum" is located in and around Romney Marsh. Ith's the sixth book of the Therodore Therhune series (but to whom am I telling this) and deals with smuggling there. Might be an interesting follow-up read.

Mark and Anon, thank you. I'd never seen the Disney version - wow, Patrick McGoohan!! And I'm interested to know about the Graeme book. I've got hold of a Leo Bruce book also set on the Marsh.

It is said that Thorndike got a lot of his ideas from chatting to fellow rail travellers as he moved from repertory theatre company to repertory theatre company every week.
There have been two Dr Syn movies, the first from 1937, with George Arlis and a young Margaret Lockwood, the second a Disney from 1975 with Patrick McGoohan.
Many readers - like me - will have discovered the Romney Marsh through the wonderful children's adventure novels of Monica Edwards. A beautiful historical part of England, and well worth a visit. A great memory prompt, Martin, thank you!