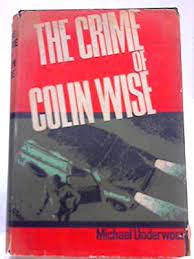 Michael Underwood was a self-effacing man, most of whose books reflected his interest in and knowledge of the law. The people I've spoken to who knew him regarded him as a likeable chap as well as a dependable writer, as this obituary by Harry Keating in The Independent indicates. To an even greater degree than his fellow lawyer Michael Gilbert, he preferred not to put much of his own personality into his fiction, and this may help to explain why he never became a high-profile writer.

I recently acquired a copy of The Crime of Colin Wise that he inscribed to some friends in the year of publication, 1964. The dust jacket blurb describes it as 'certainly the most intriguing and perhaps the most unusual crime story Michael Underwood has yet written'. It's an inverted story, told from the viewpoint of Colin Wise himself. Colin is a young man who works for a TV repair company (ah, those were the days, or perhaps not...) and who, when the story begins, has decided to commit murder for money.

His intended victim is an author who is about to embark on a six-month trip overseas. Colin's cunning plan is to kill him, hide the body parts (after dismembering the chap in the bath) and then take control of his finances. At first the plan goes well, but it soon becomes clear that Colin's crime is far from being a perfect murder.

I always find that Underwood keeps me reading, because his prose, although undramatic, is fluent. The story is interesting, because although we feel sure that things won't go smoothly for Colin, what exactly will happen to him is unclear. There are trial scenes and, as you would expect, these are handled authoritatively. Not does the story outstay its welcome. So I read the book quickly and with genuine and sustained interest.

My main reservation is that Colin himself is deeply unappealing. He's selfish and has few redeeming qualities. Compare Dr Bickleigh in Francis Iles' Malice Aforethought or the protagonists in Julian Symons' The Man Who Killed Himself and The Man Whose Dreams Came True. Those individuals also get involved in terrible crimes, but the authors persuade the reader to feel at least a degree of kinship with them. dreadful as they are. That is more than one feels for sociopathic Colin. And those books also had a superb ironic twist. Underwood contrives a twist at the end of his book, but because it hasn't been foreshadowed, I felt it didn't have as much impact as it should have done. Sometimes you can be too low-key.