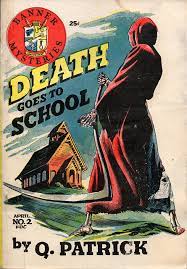 Death Goes to School was first published in 1936, under the pen-name Q. Patrick. My copy is a 'Banner Mystery' paperback from 1945, as per the image above. According to the invaluble online resource Crime, Mystery & Gangster Fiction Magazine Index, this imprint, edited by Ken Crossen, extended to just two publications. This was the second, but the story itself can't  be the reason that Banner folded up. Although this is far from the best of the Q.Patrick stories, it's not bad.

The Banner version of the book is so slim that I wondered if the original novel was abridged. This seems, however, not to be the case. And if the story had been any longer, it would have outstayed its welcome. The length of this version seems right for the ingredients of the story and the number of possible suspects (which is very limited, and I think a significant failing).

This is one of many Golden Age detective stories set in a fee-paying school. (I've never, ever read a novel written during the 1930s which is set in a grammar school). Indeed, the two murder victims in the story (others die off-stage) are children, and one of the crimes has an especially macabre flavour. The setting is England, but there are a number of American characters, and the story has its roots in the United States.

Online sources disagree as to the precise authorship of the book, but it seems pretty clear that it was written by Richard Wilson Webb, while Curtis Evans has suggested that his future collaborator Hugh Wheeler may have had some input, prior to Webb and Wheeler becoming a fully-fledged writing partnership. Both Webb and Wheeler were Englishmen who moved to the US. The build-up is so-so, in my opinion, because I didn't find the characters or indeed the central mystery especially engaging. But the weaknesses are redeemed in the later chapters as the pace hots up and there are one or two pleasing plot twists.

Despite the minor ghost story element and some interesting lesser characters this is my least favorite of the Webb mystery novels. I thought the ending very unfair from writers known for their adherence to "fair play" rules.

I did enjoy this book - but my notes say that the writing was better than the plot. I have the Banner version as well. It is slightly abridged. I was able to interloan a Cassell and Company edition years ago and compared the two. Chapter 1 was cut by about 15 paragraphs, I recall. I didn't check the rest of the book - too busy reading :) The e-book published in 2019 seems to be based on the Banner text.

John, Monica, thanks. Monica, I'm very interested to learn that it was indeed cut for the paperback version.