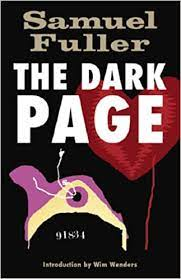 Samuel Fuller is remembered today mainly as a film director. His movies were sometimes under-estimated and often made on the cheap, but his storytelling flair often shines through. Among various other accomplishments, he was also a talented novelist and The Dark Page, published during the Second World War while he was serving as a soldier in Europe, is a particularly interesting and highly readable book.

The book was filmed (although not by Fuller) as Scandal Sheet; I haven't seen the movie, but reviews suggest that it lacks the novel's hypnotic grip. And grip the reader it certainly does, partly because of the punchy prose and partly because the set-up is very appealing, while the background - in the newspaper business, which Fuller knew very well - is done with tremendous conviction.

The story opens at a Lonely Hearts Ball, organised by ace newspaperman Carl Chapman. Carl has an eye for a headline and the event is a great success. He's at the peak of his powers, happily married, a family man. But disaster awaits. Someone at the Ball recognises him. And it turns out that Carl has a secret in his past, a secret he will stop at nothing to protect.

The plot influenced that of a better-known book, Kenneth Fearing's The Big Clock. I admire Fearing's version of the basic idea, but Fuller's treatment is equally impressive. Even in the 21st century, an enterprising film-maker could conjure up a very good movie from the raw material. My paperback edition benefits from an intro by Wim Wenders and an afterword by Damien Love, both written in 2007 and both of considerable interest. I can definitely recommend this one. It deserves to be better known.