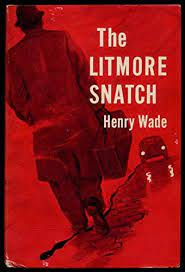 The Litmore Snatch, published in 1957, was Henry Wade's final novel. He was 70 when it appeared. I've had a copy for years, but until now I've never got round to reading it, despite the fact that I'm a long-term fan of Wade. I suppose the reason was because I feared it wouldn't be much good. The title, with its faint hint of desperate trendiness I found off-putting. Another factor was that I've read very few really good books about kidnapping. And there's been very little discussion of this one, despite a revival in Wade's popularity in recent years.

But I decided, for no particular reason, to give it a go, and I'm very glad I did. Rather like Wade's debut, The Verdict of You All, written more than 30 years earlier, it's a story which is heavy on police investigation, and rather reminiscent of the work of Freeman Wills Crofts. The setting is interesting and untypical - the north east coast of England. The main locale is the fictional town of Harborough (rather more built-up than Scarborough, and to the north) but Hartlepool also plays a part.

I found the opening pages a bit ponderous. In some books (but not others) Wade's prose did plod along rather than move with a zing, and at first I felt this was indeed going to be an anticlimactic novel, lacking the energy of its predecessors. But once the son of newspaper owner Herbert Litmore is kidnapped, things liven up. One very interesting element in the second half of the story is the part played in the inquiry by a woman police officer, Sergeant Mary Wittam. There may have been British books before this which featured female cops, but I can't think of any.

Wade does try to move with the times - a holiday camp, Bullivant's, which is presented as a sort of upmarket Butlin's, is relevant to the storyline, for instance - but as so often, it is his interest in the relationships between police officers that is most striking and effective. The plot is workmanlike rather than dazzling, but it kept me entertained. Overall, The Litmore Snatch is a good read, and represents a perfectly sound finale to a first-rate crime writing career.

Interesting - if ever there was a damning word - review.

On the one hand, you are a bit dismissive:
I found the opening pages a bit ponderous.
I felt this was indeed going to be an anticlimactic novel,
lacking the energy
The plot is workmanlike rather than dazzling
a perfectly sound finale to a first-rate crime writing career

interesting element ... the part played in the inquiry by a woman police officer,
it is his interest in the relationships between police officers that is most striking and effective.

This leaves me thinking that you have read much better by the same author. Have I got the wrong end of the stick? If not, what would you recommend?

Hello James. You have got the right end of the stick. This book has genuine merit, in my opinion, for the reasons mentioned. But I don't think it's as good as some of the others. My favourite is Lonely Magdalen, which is terrific. Heir Presumptive is very different but hugely enjoyable too.

Thanks for the recommendation, I will hunt down a copy and give it a go