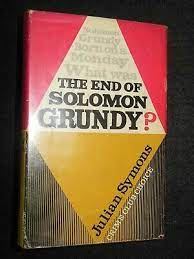 Julian Symons published The End of Solomon Grundy in 1964 and I first read it a few years later, after borrowing from the local library an omnibus of three of his novels. I must have been about fourteen or so at the time. Having exhausted the works of Christie and Sayers, I was venturing into what was then contemporary, cutting-edge crime. As I later learned, this book was one of Symons' own favourites, though I had mixed feelings about it. I'm now glad to have the copy Symons inscribed to his friend and fellow crime writer George Sims, but half a century later some misgivings remain.

Symons was interested in social satire, and there's a good deal of that in the first part of the book. Along the way, he tackled various burning issues of the time, including suburban housing, racism, sexual mores, and homophobia. So the book casts very interesting light on progressive thinking of the time. I'm pretty sure that when I read it at a tender age, some of the points Symons were making went over my head. And of course, what was progressive then is not so progressive now, and today the book seems much more dated than some of Symons' other novels written in the Sixties. As a document of social history, however, it does have considerable fascination.

The main setting is The Dell, an upmarket housing estate which Symons based on a real-life development near his one-time home in Blackheath. There is a disruptive figure in The Dell, namely a ginger-headed Irishman called Solomon Grundy. He's lived there for some years, and is a successful commercial artist, but his marriage isn't faring too well and his temper is apt to fray.

At a party, Grundy has an encounter with a young woman, who claims he attacked her. Subsequently, she is found dead. Who has killed her? Grundy becomes the prime suspect and there's plenty of circumstantial evidence to suggest his guilt. There is a trial, described at length, which features Magnus Newton QC, the criminal lawyer who had appeared in some of Symons' earlier books.

As always, Symons writes very engagingly. I enjoy reading him, as I enjoy reading such different writers as Michael Gilbert, Peter Lovesey, Reg Hill, and Robert Barnard. Their prose is lively and witty, their puzzles unorthodox, their stories always highly readable. But The End of Solomon Grundy isn't one of my favourite Symons mysteries. The plot felt rather anti-climactic when I first read the book, and it still does. And although Symons was focusing on psychology, I'm not convinced that he really captured the key relationships between his characters in adequate or convincing psychological depth. Beta plus, rather than an alpha.

One of the first books of his I read in the 1970s and like you Martin I didn't enjoy it. Much prefer his 1950s books and the Francis Quarles stories

Thanks, Jamie. There is also some very good plotting in books such as The Players and the Game, The Plot Against Roger Rider and the strangely under-rated Death's Darkest Face