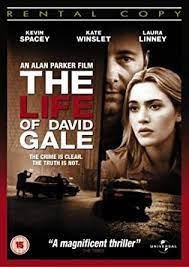 The Life of David Gale was the last film made by that excellent director Alan Parker. Nicolas Cage was also involved in the production, and the screenplay was written by Charles Randolph (whose other credits include The Interpreter). The cast is led by Kate Winslet and Kevin Spacey, and their names tempted me to give it a watch. This is a film which seems to have divided opinion quite sharply. Critics disliked it. Audiences give it high ratings.

What explains this disparity of reaction? I think it must have a great deal to do with the central theme of the story. This is a thriller which has capital punishment at its heart. There is a race against time in the traditional way as Winslet's character (journalist Bitsey Bloom) strives to save the life of Gale (Spacey) before the time appointed for his execution. But the pros and cons of the campaign to abolish the death penalty are also central to the film, and.Parker described it on his very informative website as 'a thriller with a polemical heart'.

David Gale is a philosophy lecturer and passionate campaigner against the death penalty who is about to be executed when Bitsey is offered the chance (in return for half a million dollars) to have an exclusive interview with him for her magazine. The deal is done, but as Bitsey listens to Gale tell his story, she begins to believe that he is innocent of the crime. But if he didn't kill his fellow activist Constance, who did?

The quest to find the truth is very well handled, although there are also various holes in the plot. But if you consider this film as a thriller, I think it works pretty well despite those flaws, mainly because of the excellence of the acting. It's quite a long film, but Parker certainly knew how to keep the momentum going in a movie. If you're looking at the polemical side of things, however, I'm sure you'd find it equivocal. For my part, I was engaged right to the end and the final, truly outrageous twist.