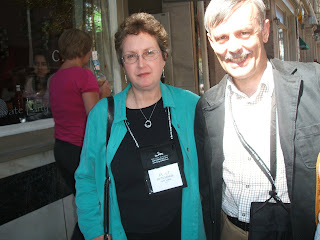 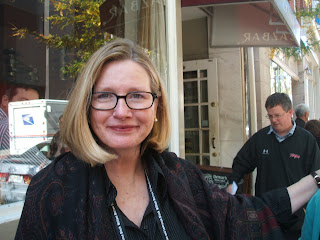 One of the real highlights of my trip to Baltimore was to be invited to lunch by Janet Hutchings, the editor of ‘Ellery Queen’s Mystery Magazine’. We originally met ten years ago, when the first US edition of one of my novels was published, and I visited New York ahead of a trip to the Philadelphia Bouchercon, and it was lovely to see her again.

Janet has published a sizeable number of my stories in EQMM over the years and I’m grateful to have such a connection with a marvellous short story magazine that now enjoys legendary status within the genre.

Janet also introduced me to an American crime writer I hadn’t come across before – Melodie Johnson Howe (lower photo.) Melodie turned to crime (fictionally) after a career in acting, and I’m keen to check out her work.

Incidentally, Melodie is married, as she says, to a legend – the record producer Bones Howe. Bones produced one of my favourite sixties songs of lost love – ‘One Less Bell To Answer’, written by the great Burt Bacharach, who featured yesterday in an interview in 'The Guardian', and whose latest concert at The Roundhouse is to be televised on the BBC on Tuesday night (just as well because I couldn't get a ticket...) The title of that song, by the way, is one I fancy using for a crime story one of these days.

Melodie Johnson Howe is a wonderful writer--she was an Agatha nominee for her novel _The Mother Shadow_, and one of her stories appears in _Malice Domestic 10_. You can also see Bones Howe listed in the credits for the film "Late for Dinner" (perf. Marcia Gay Harden, Brian Wimmer, and Peter Berg).

It was great meeting you Martin. And thanks for the photo and mention in your blog. ONE LESS BELL is my favorite too.

Thanks for the kind words. You actually saw "Late for Dinner"?