Behind Her Eyes - Netflix review 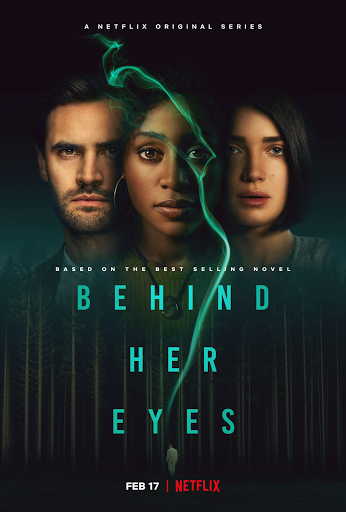 I was in two minds about watching Behind Her Eyes on Netflix. On the one hand, the story is based on a novel by Sarah Pinborough and I read an entertaining thriller of hers on a plane trip, in those long-ago days when travelling by plane was a regular occurrence. That book was Dead to Her and I thought it was very skilfully written. On the other hand, I'd seen several reviews (while trying to dodge spoilers) that complained about the terrible ending of the TV series in crushing terms.

Having enjoyed Dead to Her, I decided to give it a go and make my own mind up. To begin with, the story is the stuff of conventional psychological thrillers, all about a dangerous sexual liaison. We begin with Louise Barnsley (Simona Brown) a single mother whose husband left her for another woman (and then another...) She is bored, and goes for a drink with a female friend. The friend lets her down, and Louise spills a drink over a handsome stranger. They get chatting and are mutually attracted.

Louise works in a clinic - and guess what? A new psychiatrist joins the practice, and it turns out to be the chap in the bar: Dr David Ferguson (Tom Bateman). The long arm of coincidence, huh? Before long, they begin an affair. And then, Louise bumps into David's wife Adele (Eve Hewson) and they too become very close. Again, coincidence looms large.

So far, so predictable, but no real complaints. And I must say that Simona Brown does a terrific job in quite a challenging role. But in the course of the six episodes, things take an increasingly unlikely turn. As so often with a modern six-episode TV series, one feels that the main writer Steve Lightfoot had four episodes worth of material and decided to pad them out. I began to get worried the first time that astral projections were mentioned...

I've no idea if the TV version is anything like the book, but this story is very different from Dead to Her and although my interest was engaged, I enjoyed it much less. As I've often said, I admire ambitious writing, and I suppose it could be said that the central idea here is ambitious. It's also genre-bending, but not in a way that I found remotely plausible. I like a good plot twist as much as anyone, but by definition a good plot twist has at least a touch of credibility. I'm afraid I felt the critics were right about this one.