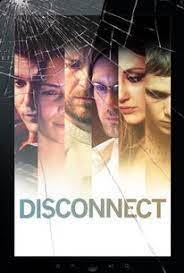 Since the start of lockdown, I've been at home much more and this has inevitably led to more time spent watching TV shows and films in between all the writing activities. I've ranged widely in my viewing and tried a lot of films I've never heard of. Some of them, to be honest, I wish I'd still never heard of. But from time to time I've stumbled across a movie of unexpectedly high calibre.

I'm inclined to put Disconnect in that category. I started watching with no particularly high hopes, and found the early scenes a little confusing. I wasn't quite sure what was going on. But soon it became evident that there were three distinct but inter-connected storylines, and there was something gripping about each of them.

A common thread is the use of technology and the dangers it poses. Of course, technology develops at such a pace that even a film made less than a decade ago is in some respects now dated. But that doesn't matter because the real strength of the film is in the timeless exploration of human nature. One story concerns a pair of boys who cyber-bully a sensitive teenager with tragic results, another concerns an unhappy couple who become the victims of cyber-fraud, and the third concerns a journalist who wants to write an expose of the slimy trade of video chat room strippers.

Andrew Stern's script is strong and well-structured, while the acting is of a high standard - not just in the case of the leads such as Jason Bateman, but also such youthful performers as Jonah Bobo, who makes the most of a challenging role. The title refers, among other things, to disconnects in personal relationships and these were very well handled. I found myself caring about the fate of the characters all the way to the dramatic moments when the stories are brought to a conclusion if not a complete resolution. This film strikes me as a neglected gem.