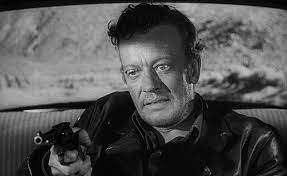 The Hitch-Hiker is a 1953 film (there have been other movies with the same title) directed by Ida Lupino, a British actress who moved to Hollywood and became at least equally renowned as a film director. It's often described as the first film noir to have been directed by a woman, although - at least outside the US - there are other candidates for that accolade. At the time of its release, it was not particularly admired, but its reputation has kept improving over the years. And there are good reasons for this.

The origins of the storyline are complex. The main source was a short story by Robert Joseph, which in turn drew on Build My Gallows High by Geoffrey Homes (the pen-name of Daniel Mainwaring). Mainwaring, a very good writer, also contributed to the screenplay. Ida Lupino added a further ingredient to the mix by introducing material based on the crimes of a recent real life spree killer, William Edward (Billy) Cook, who murdered six people in 1950, prompting a large-scale manhunt.

Two friends called Roy and Gilbert (played by Edmund O'Brien and Frank Lovejoy) are driving along with a view to going fishing for a few days when they stop to help a stranded motorist whose car has broken down. Unfortunately, they have been conned. The chap they want to help has stolen the car after killing and robbing its owner, and has committed similar crimes in the past. He is Emmett Myers (William Talman, a truly mesmerising performance) and he has a gun.

A long drive through the desert - vividly evoked, even in black and white - follows. The tension mounts as the authorities close in on Myers. The captives make various rather inept attempts to escape, and their own relationship comes under pressure as it becomes clear that Myers is simply using them - once he has achieved his objective, he will dispose of them. It's an admirably short, snappy film, but I felt Lupino could have developed the characters and storyline further. I suspect that her determination to achieve a degree of 'this could happen to you' realism was an inhibiting factor. Overall, I think it's pushing things too far to claim this film as a masterpiece, but it's undeniably gripping and well-made.

A fairly satisfying little movie. I think it was Lupino's only foray into noir territory as a director?

Oops it's William Talman, not Frank. He's best known to most as the hapless perennial loser to Perry Mason in umpteen tv episodes. He was well-matched with Raymond Burr, who also specialized as a heavy in numerous noir classics in his early career.

Martin, I think you've made an error, Myers was played by William Talman. It is a great performance and helped him get the role of DA Hamilton Burger in the "Perry Mason" tv series.

Thanks, everyone. And thanks in particular for picking up that error - duly corrected now! It's always helpful to be well edited!

I notice on youtube they are playing colour episodes of Kraft Suspense.Theatre (1963-65).
I saw one with Gina Rowlands. Another episode had the young Robert Duvall.
Worth sampling!

RJS,
Go to Internet Archive (archive dot org) and do a search for Kraft Suspense Theatre. They have most of them available. Just this past week watched several episodes. Enjoy.

RJS, Eric, many thanks. I will do some exploring...