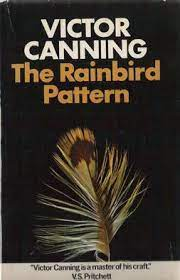 A little while ago, I was pleased to lay my hands on an inscribed first edition of Victor Canning's The Rainbird Patten (1972). The jacket bears an encomium from V.S. Pritchett, no less: 'Victor Canning is a master of his craft'. That was the craft of thriller writing, and Pritchett wasn't a lone voice. Over the course of his long career, Canning wrote plenty of entertaining mysteries. John Higgins, a great expert on his work, regards this particular book as his masterpiece.

I first became aware of it many years ago, when I watched Hitchcock's last film, Family Plot, and discovered that it was based on The Rainbird Pattern. Loosely based, it seemed, and having enjoyed the film (which is essentially a black comedy) I was interested to read the book. At long last I've got round to it, and though it is very different from the film, which I really must watch again, I did enjoy it.

There are two distinct plot strands, which gradually intertwine. A kidnapper called The Trader is being pursued by the secret service men Bush and Grandison. Meanwhile, Blanche Tyler, a medium, and her lover George Lumley, are trying to pull the wool over the eyes of a wealthy woman called Miss Rainbird. The kidnapping plot is mildly interesting, but for me the book really comes alive in the sections dealing with the relationship between Blanche and George, and their connection with Miss Rainbird. These three are great characters, much more enticing to read about than either the Trader or Bush and Grandison.

In the later stages of the book, there is a shocking development, and the story continues to develop in an unpredictable way. The ending is chilling and memorable. This book earned Canning a Silver Dagger from the CWA (the Silver Dagger was essentially a runners-up award to the Gold Dagger, but was discontinued years ago). This success, and the quality of the film version, means that The Rainbird Pattern definitely should not be a forgotten book. That inscription, by the way, was to Leigh Crutchley, an actor who did quite a bit of work for the BBC at around the time when several of Canning's thrillers were being broadcast on the radio.

Thanks so much for reminding me of this book and others by Victor Canning. I have read this one, absolutely loved it. The next I have to read is The Mask of Memory.

I haven't read that one, Tracy, and I'd be interested to know what you make of it.