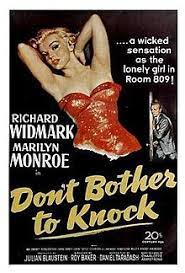 Don't Bother to Knock is a film based on Charlotte Armstrong's novel Mischief, which I reviewed back in 2017. I've just caught up with the screen version, filmed in 1952 (the year after the book appeared - quick work!) with a script by Daniel Taradash. Taradash made quite a few significant changes to the storyline, but in my opinion they work well. The director was Roy Ward Baker, who made a number of entertaining movies, including Quatermass and the Pit.

The film derives much of its strength from the quality of the cast. Richard Widmark plays Jed Towers, a tough pilot whose relationship with Lyn Lesley is on the rocks. Lesley was the first film role for the gifted Anne Bancroft. Meanwhile, a couple who are attending an event at a hotel where Jed and Lyn meet are in need of a babysitter for their young daughter Bunny. The elevator man (Elisha Cook Jr.) introduces them to his niece Nell. And she is played by none other than Marilyn Monroe...

I think that Monroe's performance as a deeply disturbed young woman shows that she had considerable acting ability. Of course, she's a cultural icon, and very glamorous as well as tragic, but there was genuine talent there as well. Some people reckon it was her best performance, in terms of acting, and it's quite possible they are right.

The story is tense and moves at a good pace. To say too much about the plot would be unwise - it's well worth watching if you get a chance. Recommended.

I remember seeing this years ago at a special screening at the American Film Institute--and your review here resonates so much with my own memories (it's been awhile!) especially Monroe's performance. Terrific.

Thanks, Art. I'm planning to read some more Armstrong mysteries in the near future. She was a good writer and so visual, one can see why her stories adapted well to the screen.