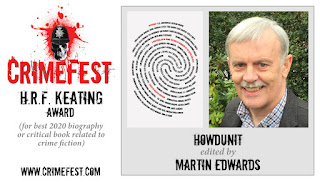 I'm truly, truly delighted that Howdunit has won CrimeFest's HRF Keating award for the best critical/biographical book related to crime fiction. No actual award ceremony, of course, in these pandemicky days, but above is the logo I've been sent to prove that I'm not imagining it! And I've just recorded a brief video as well. The award is all the more gratifying given the high calibre of the shortlist, one of the strongest I've ever featured on, which contains wonderful books that any fan would love to read.

There's another reason why this is a very special award as far as I'm concerned. The award is, of course, named after the late Harry Keating, a fine crime writer who was also an insightful critic and commentator on the genre. And Howdunit contains a nice section written by Harry, as well as various references to his excellent book about writing crime fiction.

This is an award for a collective effort, of course. Howdunit is what it is because of the remarkable calibre of the ninety contributions by Detection Club members, past and present. As I've said before, the generosity of the contributors (and the estates and agents of those who are deceased) was quite humbling.

Because so many people were, in the end, keen to contribute to Howdunit, putting it together proved a rather more demanding and complex task than I originally envisaged. But what a fun task it was, to receive all that material and to try to weave it all together in a way that readers would find interesting and enjoyable, whether or not they have any personal aspirations to write crime.

This really is a lovely moment in my writing life.

Congratulations, Martin! A just reward for all the work you put into it, and the skilful way you wove everything together.

Yes richly deserved Martin. The world of crime fiction deserves huge gratitude to you for your tireless promotion of the genre. The book should have won the Edgar. When is the paperback coming out?

Thanks to all of you for your kind words. And Michael, I don't forget that you were the very first person who offered a contribution - and a really good one, too.

Jamie, thanks. There will be a paperback but I don't think it is due until next year. Not sure about the date that the publishers have in mind.