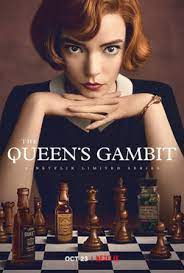 The Queen's Gambit, a seven-part series on Netflix, isn't a crime show. It's the story of a female chess prodigy. Not the most exciting subject, you might think, but you'd be wrong. This is a story told with a great deal of suspense, thanks to scripts by writer-director Scott Frank, who has to some extent honed his skills on crime films, including Malice and A Walk Among the Tombstones. It's been a huge hit during the pandemic, and I can see why. I gulped it down as quickly as the protagonist knocks back her drugs.

Beth Harmon is the prodigy. She's played as a child by Isla Johnston and Annabeth Kelly (both very good) and by Anya Taylor-Joy, whose performance is as mesmerising as her chess moves. At the age of nine, she's orphaned (her backstory is touched on repeatedly, but not in great detail) and goes into an orphanage. There she meets the janitor, who is playing chess by himself. She is fascinated by the game and he teaches her. The orphanage dishes out tranquillising drugs like Smarties and soon she is hooked on them, as well as on the dream of becoming a top chess player.

Beth is adopted by a hard-drinking woman, Alma, who is married to a rather dreadful, selfish man called Allston. Allston abandons them, but this does as least have a positive impact on the relationship between Alma and Beth. Alma doesn't understand chess, but she acts as Beth's manager - and keeps on drinking. Addictions of various kinds are a recurrent theme in the narrative and I gather that Walter Tevis, author of the original novel (and a high calibre writer whose other books included The Hustler), was himself an alcoholic.

I've always enjoyed playing chess, and I use to play in tournaments for my school team (not that I was brilliant, far from it) but I realised that in order to be a top player, you really have to commit yourself to it, and I never wanted to do that. Beth, however, does. I think it's very difficult to dramatise a story about chess and make it exciting to watch, but Scott Frank makes a success of it. The script is so strong that, even though Beth almost never loses, and even though I wasn't convinced by the drug use in the story (would it really make her play better for any consistent period of time?) I was glued to the screen. The setting, in the 1960s, is very well done, and I also like the way that Frank steers clear, for the most part, of simplistic stereotypes in terms of character and incident. When so many series of this length are full of padding and thus weakened, Frank's script seldom wastes words. It's a model of good commercial writing.

With contributions from ninety of the Detection Club’s brilliant authors, past and present, so skilfully woven together by you, as editor, Howdunit is a most engaging, entertaining and inspiring read, and a worthy winner.

Enjoy this lovely moment in your writing life!

Thanks so much, Paul!