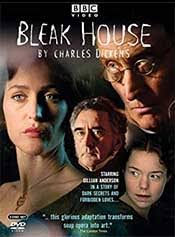 I've been a fan of Charles Dickens since my teens; I've even featured him in a couple of short stories. He was a terrific novelist. Much as I admire David Copperfield, Great Expectations and the light but enjoyable The Pickwick Papers, my favourite Dickens novel has long been Bleak House. I received my copy as a school prize when I was about fourteen and devoured it with great enthusiasm - despite its length. When the pandemic gave me more time for TV viewing, therefore, I thought I'd catch up on Andrew Davies's 2005 TV adaptation, which I missed first time around. Thanks to good old BBC Iplayer, I was rewarded with riches.

Indeed, deciding to watch this series turned out to be one of my best lockdown decisions. Davies is a superb screenwriter, and I've enjoyed much of his work, but here he excels himself. Each of the fifteen episodes into which he split this very long and complex novel is gripping. Davies's secret is that, like Dickens, he understands that a writer should never be ashamed of writing entertainingly. You can still make powerful points, and in both the novel and the TV series, Dickens and Davies do just that.

Davies will, I imagine, be the first to say that he was exceedingly fortunate in his cast. It is outstanding and the stars put in, without exception, tremendous performances. So Gillian Anderson is a charismatic if aloof Lady Dedlock, Timothy West is great as her bumbling old husband, Anna Maxwell Martin is charming as Esther (and more appealing, I think, than she is in the book), while Nathaniel Parker, so often cast as the good guy, is splendidly loathsome as Harold Skimpole. Denis Lawson does a fine job in the tricky role of John Jarndyce, while Charles Dance is utterly menacing as the remorseless solicitor Tulkinghorn.

I could go on and on, because there are so many fine performances, but I do want to single out Phil Davis's interpretation of the odious moneylender Smallweed. Absolutely brilliant. I must say that I was surprised that fog doesn't play a part in the programme - Davies blamed technical problems for causing him to remove foggy references from the script - but frankly that's a quibble. There is so much to enjoy in this version. It's the best screen adaptation of a classic novel that I've ever seen. Truly a tour de force.

I also very much enjoyed this adaptation - but my one main issue about it is that Tulkinghorn is made too much of an obvious villain, whereas in the book he is more nuanced. Esther's coyness is obviously toned down a lot - although we also lose some of her funnier moments, such as her descriptions of the Jellyby household.

I remember a parody of it which included the following memorable exchange:

Sir Leicester: What are you looking at, my love?
Lady Dedlock: Only the middle distance.

I’m a Dickens fan too, and I received the DVD set for Bleak House as a Christmas more than a decade ago - but haven’t got round to watching it. 😅 Good to hear that it’s a very strong adaptation.

No fog??? That's almost heresy, at least in the Chancery scenes. Dickens put it there for a reason! There was a 1980's version too with Diana Rigg as Lady Dedlock.

Jonathan O, I agree that the book's portrayal of Tulkinghorn is much more nuanced. In fact, I was startled at first by the darkness of Dance's performance. But I was won over by its excellence. I like that quote!

Jonathan, I felt that the mystery element was well done. Adapting a book of this complexity must have been very difficult, but Davies rose to the challenge magnificently.

Marty, it is heresy. And yet...again, once I overcame my surprise, I was greatly impressed.

I enjoyed this one too and have it on DVD. I really liked the episodic style of the series. It felt in keeping with the way it would have been initially serialised.