This week should get the new year off to a good start, since I'm aiming to deliver a new book to the publishers. This one is called 21 and it's a short story anthology, a collective effort on the part of the members of Murder Squad, the group of northern writers founded by Margaret Murphy back in 2000. Back then, we never dreamed that the group would still be going strong after so many years. And back at the start of last year, we were looking forward to various events to celebrate our 20th anniversary - we even acquired a special logo, as you can see below! Well, we all know what happened about that, but we also planned to produce this book in 2021, and we were delighted when Severn House signed it up. 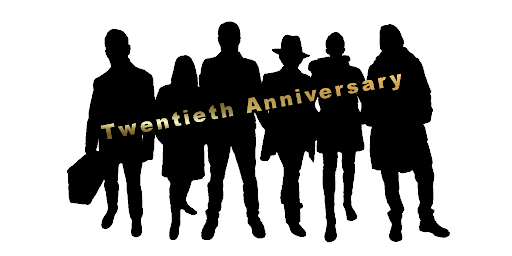 There are six current members of the Squad: Ann Cleeves, Kate Ellis, Margaret, Cath Staincliffe, Chris Simms, and me. Each of us have contributed three stories - more than half of which are either brand new or haven't previously been published in the UK, while former members John Baker (now retired as a novelist) and Chaz Brenchley (now based in the US) and, by kind permission of his widow Doreen, the late Stuart Pawson have one story each in the book. I've written an editorial intro and Margaret has contributed a foreword. We're happy with the book and we hope our readers will be too.

I tend to avoid making new year resolutions these days. At the moment, mere survival seems a reasonable objective! But I've been writing away over the festive season, and I hope that this blog will occasionally feature extended posts on selected subjects. For instance, I want to talk about Ann's latest novel and Kate's most recent Devonian whodunit, discussing facets of their writing which I find particularly interesting, and musing on the various similarities and differences in our work.

As for 'live' events, it's too soon to know what this year holds in store. Last night I enjoyed catching up online with friends such as Shelly Dickson Carr, Gigi Pandian, Jeff Marks, and Steve Steinbock, whom I've missed seeing at various conventions in the US. This was in lieu or our usual dinner at Malice Domestic, but when we'll next get together in person remains to be seen. Maybe at Bouchercon in New Orleans, if we're really lucky.

And this week I undertake my third week of online lecturing for Adventures Online, on The Art of the English Murder Mystery. I very much enjoy working with various colleagues on these sessions, not least Simon Dinsdale, a former police superintendent with a wealth of great stories. This is a programme aimed currently at American crime fans, but who knows, it may extend to the UK in due course. Fingers crossed!