Published in 1934, The Plague Court Murders witnessed the debut of Sir Henry Merrivale, solver of locked room mysteries and unquestionably one of the Great Detectives of the Golden Age. Interestingly, the book was originally sub-titled 'a Chief Inspector Masters Mystery'. As Doug Greene says in his magisterial biography of John Dickson Carr (required reading for Carr fans and indeed any fan of classic crime), the author initially focused on the Scotland Yard man, who is a sceptical ghost-hunter, but this interest faded in Masters' later cases. Merrivale, who only enters the story half-way through, is by far the more memorable character, and it's no surprise that Carr chose to put him centre stage from then on. 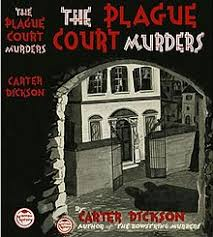 The book was published under the name Carter Dickson, and Doug indicates that Carr's initial concept was that these books, branded distinctly, should concentrate on slightly simpler central puzzles. The mystery here is how a dodgy medium, Roger Darworth, can possibly have been murdered in locked room by an old dagger, once the property of a hangman, whose ghost is said to haunt Plague Court.

Quite apart from its historic importance as Merrivale's debut, this book is attractive because of the wonderfully atmospheric writing. Carr does lay the weirdness of Plague Court on with a trowel, but for me it works really well, and helps to create the necessary (very necessary) suspension of disbelief. The problem of the first murder (and as the title indicates, there is another one, almost as bizarre) is absolutely fascinating.

All that said, this isn't one of my favourite Carr mysteries. That's because I found the solution - ingenious as it is - very hard to swallow in several respects. No spoilers here, but I struggled to believe that the culprit could have got away with the central deception that set up the circumstances for the crime. One can debate whether it's an example of fair play, but I'm inclined to give Carr the benefit of the doubt on that point. However, the suspects and their possible motives weren't, for me, as interesting as the characters in Carr's best books, and the split of detective interest between Masters and Merrivale is rather clunky. But one has to remember that, although Carr was by 1934 a seasoned writer, he was still just in his late twenties. This book isn't a masterpiece, but it's a fun read all the same.