The sub-title of Colin Larkin's Cover Me, just published by Telos Books, speaks for itself: The Vintage Art of Pan Books: 1950-1965. This large and lavishly illustrated is a joy to leaf through, and Larkin's chatty text brims with enthusiasm for his subject. He explains how he acquired a massive collection of Pan paperback cover artwork, and one or two controversies which he encountered thereafter. Illustrations which were once perceived as valueless and disposable are now very valuable. This book is a long-term project, clearly a labour of love, and Telos have done him proud with the quality of reproduction of the images. Author and publisher deserve to be congratulated. 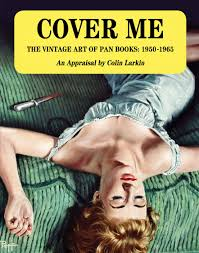 Paperback artwork isn't a subject that I'd ever thought about much (except perhaps in the context of my own books) until I bumped into the American expert Art Scott at the Las Vegas Bouchercon, not far short of twenty years ago. I bought a copy of Art's book about Robert McGinnis's artwork and although Colin Larkin is interested in an imprint rather than an individual artist, he is clearly as expert as Art Scott. He discusses many of the artists responsible for Pan covers and among other things, I learned the - to me, rather amazing - fact that the Pan piper logo was originally designed by Mervyn Peake.

This is a book about artwork rather than the novels themselves, but since Pan had a specialism in crime and thriller titles, many novels and authors familiar to crime fans feature here. It's clear that Colin Larkin isn't an Agatha Christie fan, and he is under the mistaken if not uncommon impression that The Mysterious Affair at Styles is a locked room mystery (it's a closed circle mystery, i.e. with a restricted pool of suspects, which is rather different). But this is a tiny quibble - the sort reviewers indulge in just to prove they've read the book! In a volume of this kind what matters is the principal subject matter, and he discusses that in a very informative way.

I was starting to buy cheap paperbacks at or just after the end of the era that Colin Larkin writes about, and to me - in those days - the Pan covers seemed rather old-fashioned. I much preferred Tom Adams' covers for the Christies which appeared under the Fontana imprint. Now, with the distance of time, I've modified my views. The Pan covers seem to capture a particular era, an age of austerity when excitement was perhaps felt to be in short supply. In some cases, they also seem rather sexist, but at the time 'raciness' was considered very appealing. We can learn about social attitudes from a book like this, just as we can from reading the novels themselves. The vivid, occasionally lurid covers played a huge part in selling books in large quantities.

Covers do matter, whether we authors like it or not. And thanks to Colin Larkin and Telos, we can now enjoy an extended glimpse into a vanished world. I was really glad to read this book.