Which Wimsey? Carmichael versus Petherbridge 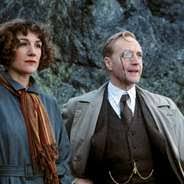 I keep trying to find upsides from the pandemic. One of them has been the chance to watch some TV shows and films I've missed, or not watched for a long time. I've now had a second look at two television series which aired in the 70s and 80s respectively. They are adaptations of Dorothy L. Sayers' Lord Peter Wimsey novels, with different actors playing Wimsey. All the books but Whose Body?, Unnatural Death and Busman's Honeymoon were screened. There has never been a TV or film version of the under-rated (but tricky to film) non-series novel, The Documents in the Case.

The first thing to say is that both series stand up to the test of time. Much better than I'd have expected, to be honest. This is perhaps especially true of the first series, starring Ian Carmichael as Wimsey. One tends to under-estimate Carmichael, and as he admitted himself, he was really too old for the part, but he throws himself into it with so much enthusiasm that one can't help but be swept along. He was a real fan of the stories, and that degree of commitment is evident. Wimsey isn't the easiest character to play, because of his (often deliberate) mannerisms, but Carmichael does a good job. The production values aren't brilliant, but the scripts are very capable.

I had warmer memories of the subsequent series, featuring Edward Petherbridge. The way in which he conducts his pursuit of Harriet Vane (splendidly played by Harriett Walter) is slightly more mannered than I recalled, but his performances are consistently good, as he rises to another testing challenge. Wimsey in the later books had become less of a Woosterish 'silly ass', and rather more of a romantic hero. There was some element of wish fulfilment in his portrayal, as Sayers herself admitted, and also in that of Vane, but I've always thought that it's rather patronising, as well as less than accurate, to say that Sayers 'fell in love with her hero'.

Sayers' ambition as a crime writer was admirable. Yes, there are flaws in all the books, but there are riches too. And by and large, the stories make excellent television. Five Red Herrings is a relatively plodding alibi mystery, but the TV version was, for me at least, definitely more enjoyable. The screenplay of Have His Carcase might perhaps have been better as three episodes rather than four, but reducing the chit-chat in Gaudy Night resulted in an entertaining version that captures some of the flavour of the original without the prolixity. I also loved Richard Morant's version of that estimable sidekick Bunter.

So - Carmichael or Petherbridge? If you'd asked me a year ago, I would definitely have opted for Petherbridge's interpretation. But on reflection, I must say that both actors (supported by very good casts) do an excellent job. For escapist viewing, both Wimsey series are perfect for these troubled times,

First time commenter here, writing under my own name! I'd say Petherbridge - I think he captures the underlying darker side of Wimsey, the legacy of his war experiences, very well. I haven't seen any of the TV series for many years, but I could never get away from Carmichael's 'silly ass' image and suspect I would still feel the same way. Probably unfair to be influenced by Petherbridge being a 'serious' actor and Carmichael being a 'comic' one, but perhaps inevitable. Interestingly, in the radio versions (often repeated on Radio 4 Extra), Carmichael comes across very well. Maybe it's time for a reappraisal - would be a good way to fill some of the long hours ahead!

I adore the radio plays with Ian Carmichael. I have listened to them multiple times and he nails it for me.

Despite Sayers being one of my favorite mystery novelists (as well as one of the first I read) I'd never seen any of the adaptions with Edward Petherbridge. I watched the first episode of Strong Poison today and enjoyed it immensely. Thank you for the recommendation.

I remember reading a while back that the producer of the series wanted to take extensive liberties with the stories. He wanted to remove essential clues in Have His Carcase and wanted to shorten Whimsy's proposal in Gaudy Night to two lines. That last was only avoided by Petherbridge and Walter refusing to shoot the scene unless it was rewritten to be closer to the original.

Hello Mike. Your reaction is similar to mine - until I took another look at Carmichael's work. It definitely impressed me more the second time around.

Thanks, Rumpers. I haven't listened to the radio versions, so worth bearing in mind.

Thanks, Kacey. Glad you are enjoying Strong Poison - a very adaptation, I think.

When the Petherbridge adaptations started one tv critic commented something to the effect that where Ian Carmichael played Wimsey as Bertie Wooster, Edward Petherbridge played him as Fred Astaire. Despite the flip nature of the comment, it comes back to me every time I watch the different series.

In an essay he wrote about the tv series, Ian Carmichael does say that the project was suggested to him (and he was enthusiastic about it) as a follow-up to his success as Bertie Wooster.

Very interesting, Michael, thank you. That Astaire comparison is new to me and I definitely appreciate it! I've never seen the play of BH, and the story did start life as a stage play. I suspect it may well work better in the theatre than on the page.

It's been decades for me, but I suspect I still won't feel Ian Carmichael is Peter Wimsey. I don't expect you to be likely to fall in love with Lord Peter, so perhaps you are more tolerant of the less suitable of the two actors.

Martin - it was great to see this post. I am completely prejudiced on this issue, as Edward Petherbridge and his wife Emily are friends and put me up for years in their guest house every time I came to London. That puts him over the top for me. But you've inspired me to go back and reconsider the Carmichael versions!

I hate fenceriders [ ;-) ]...but I like them both. I think Carmichael captures the spirit of the early Wimsey. I wish with all my heart that the powers that be would have been willing/able to do this when he was first interested in it and was himself younger. He would have been perfect. And, I think he was good enough as an actor that he could have grown the character out of the "silly ass" portrayal. Petherbridge captures the older Wimsey who, in the process of wooing Harriet, learns some very hard lessons about himself and matures a great deal in the latter books.

I know what you mean Martin - it is a bit too easy to be dismissive of the earlier series when actually they are very entertaining (and, by the way, so are the BBC Radio adaptation that Carmichael starred in at the time, mostly produced by Simon Brett). The later series sees our hero in a mellower mould and so does feel more substantial - but the style is generally so different, and the leading men having such different approaches, that a comparison seems pretty invidious to me.

I was lucky enough to see Petherbridge in the stage production of Busman's Honeymoon and it was tremendous fun, with Harriet played by Emily Richard (his real-life wife).

I've only watched the Petherbridge series and the first time I watched it was when I had just begun to read Sayers' book, (starting with Gaudy Night first). Visually he fitted the character very well and I enjoyed his on screen interactions with Harriet, (who was also played very well by Harriet Walter). It's a shame he didn't get to do more of the books.

Hello bookwitch. I do always try to be tolerant, though sometimes I fail! I think my original take on the Carmichael version was a bit too severe, despite questions about his age and physique.

Wendall, friendship is a pretty good reason for a bit of prejudice and he really is a good actor too!

Kate, yes, I think it would have been great if there had been more Petherbridge adaptations.

Thanks for this Martin. I have really enjoyed both actors playing Wimsey. I can't *quite* take Carmichael as Harlequin, but everything else is there and although I adore Petherbridge, Carmichael's readings of the audio books are better - he does a better French accent for a start! Maybe it's just time for a new Wimsey - and no I am not getting in to who would do it best!

I agree with most of what you write... and wish that Busmans Honeymoon had been done by Petherbridge and Walter et al.

You are spot on about the two actors and their portrayals. I do think though that in Gaudy Night it was a shame to not include the nephew - as it does bring out a different side of Harriet and gives us the readers more background on LPW and his family .... I would have cut one of the HHCC eps for the addition to GN... which could really have been 6-8 eps.

ah me... I do find that I dip into the EP/HW series a bit more than the IC series... What inspired casting of HW for HV. and i have always been a huge fan of EP.

Delighted to find your blog ...

The movie of Busman's Honeymoon is 5 negative stars dreadful. I've seen it via youtube, not any better recording, but the casting is poor, the acting terrible.

Thanks for these very interesting comments. I think I might not rush to watch BH on Youtube!

I love Carmichael, because he was my introduction to Sayers and Lord Peter. But I also like Peterbridge. I have DVDs of both.

Thanks, Janet. I've been glad to see that Carmichael's interpretation still has plenty of fans.