Forgotten Book - Whistle Up the Devil

Whistle Up the Devil is the only novel by Derek Smith that was 'traditionally published' during his lifetime. He was a devotee of locked room mysteries, and there's a good deal of welcome information about him in an excellent omnibus of his work that Locked Room International published a while back, and which includes Whistle Up the Devil as well as two other novels. I'm lucky enough to possess an original first edition, dating from 1953, which Smith inscribed to that great locked room mystery expert Bob Adey: 'For one "locked room" enthusiast from another'. But I have to confess that I've only recently got round to reading it. 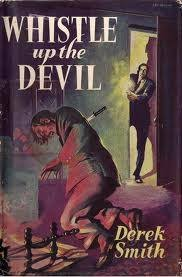 Before I did so, I checked out various online reviews of the novel. They wax lyrical about the cleverness of the plot, which includes not just one but two ingenious killings in a sealed environment. So the reputation of this once highly obscure and almost unobtainable book has worn very well. And I can see why. Not only are there some very entertaining references to the locked room mystery form in the early pages, the story zings along nicely to the end.

It's fair to say that Smith's inexperience as a novelist and limitations as a prose stylist are evident. I lost count of the number of times that one character is described as 'an old rogue', and there are passages where the viewpoint shifts from one person to another in a rather clumsy way. First and foremost, the book is a vehicle for two crafty and very hard to fathom techniques for killing someone in a locked room. The characterisation is perfunctory, and the Great Detective, young Algy Lawrence, remains two-dimensional despite his yearning for romance.

But there are ample compensations. Above all, I love the idea of a mysterious secret being passed on from one generation of the seemingly cursed Querrin family to another in 'the Room in the Passage'. This thread of the story is a highlight, but there's no denying the ingenuity of the way the crimes are committed, while Smith offers a rather neat piece of misdirection about the culprit's identity before the elaborate truth is finally revealed. Of course, it's exceptionally far-fetched, but it's also fun.

Into my wishlist. Thank you Martín!

The true first edition (Gifford) is very rare. Great finding, Martin. I only have an inscribed copy of Thriller Book Club edition. And I think that Derek Smith did much better in the Come to Paddington Fair than this title.

I enjoyed it alot and I have the whole collection of Smith works published by LRI ,they are really amazing!,It's really a surprising coencidence that Paul gallico,John sladek,hake Talbot and Derek Smith each had written only two locked room mysteries and both are masterpieces!

Enjoyed this very much! I really need to come here more often!

Thanks for these comments. Elliot, I must read Come to Paddington Fair.

I reviewed the Derek Smith omnibus for The Washington Post and agree with the correspondent that the later novel, Come to Paddington Fair, is even better than Whistle Up the Devil. I've lurked on Martin's site for a long time, but never posted a comment, so I hope copying my review doesn't violate the protocols. It's otherwise behind a paywall. Obviously, it's aimed at the general reader,
Well, I see it's too long for this comment box. Here's a part of it:


Mysteries of any sort must deal with the difficulty of distinguishing between appearance and reality, truth and illusion. So it’s quite natural that many golden-age classics are set in theaters. In “Come to Paddington Fair” Chief Inspector Castle receives, anonymously, two front row seats to a matinee performance of “The Final Trophy.” 290 Mystified but intrigued, he takes Algy Lawrence along. At the play’s climax, a stage revolver filled with blanks is used to shoot a certain character in the heart, but on this particular afternoon a second, real gun is simultaneously fired from one of the theater’s boxes. Algy captures the assailant.
It’s obviously an open-and-shut case, with scores of witnesses, including a policeman at front row center. And yet the riddles and red herrings are only just beginning. As we all know, a lot more goes on backstage than a theater’s audience is aware of. In short order, Smith undercuts every obvious explanation of how the murder was committed and by whom. And, astonishingly, he keeps on doing this all the way to the very end. Similarly, in “Whistle Up the Devil” Smith caps his initial impossible murder—the stabbing described earlier--by another, equally miraculous: A person of interest in that first death is found strangled in a locked jail cell, which nobody could have entered or left.

Welcome, Michael! Great to hear from you and delighted that you were able to share your review. As you say, otherwise, many readers here won't be able to see it. And do feel free to post more than one comment with longer reviews! I am persuaded that I must crack on and read Come to Paddington Fair!