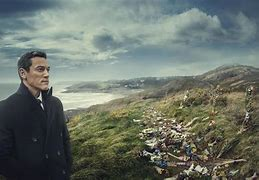 I've been watching The Pembrokeshire Murders on ITV this week. Two episodes so far, with one more to come tonight, plus a documentary about the case. I wanted to watch the drama-documentary because the case has interested me for many years. This is the latest in a number of true crime shows on the major UK tv channels, dealing with the likes of Dennis Nilsen and so on. And this trend has in turn given rise to debate about the ethics of true crime shows - a subject of some importance, but one which I'll leave to another day, other than to say that I think a great deal depends on the quality of treatment of the material.

The Pembrokeshire Murders is well-made, and Luke Evans, playing Detective Superintendent Steve Wilkins, is a charismatic actor. The story is presented as a cold case mystery: Wilkins took a fresh look at three cases which he believes are linked. These are the murders of siblings Richard and Helen Thomas in 1985, the double murder of a couple, Peter and Gwen Dixon, on a coastal path (a very high profile mystery - I remember watching the original coverage on Crimewatch UK) and an attack on a group of young people, including rape and sexual assault at gunpoint.

There's no great mystery about whodunit. The prime suspect is John Cooper, a hardened criminal who at the time Wilkins' investigation begins, is serving time in prison for other offences. Cooper is played by Keith Allen, who invests a truly dreadful man with a few glimmerings of humanity that bring him to life: it's a very assured performance, and can't have been easy. But Allen is excellent.

The investigation is intriguing. One extraordinary stroke of luck is the discovery that Cooper appeared in a TV darts game show which enables the detectives to show that his appearance at that point resembled the portrait of the suspect. So far, we haven't heard much about the victims. This is always a dilemma for writers of such a programme. How far do you trespass on personal privacy, and to what extent do you risk glamourising a cold-hearted killer by focusing on him rather than on those he attacked? The makers have tried to surmount this challenge by giving us quite extensive coverage of Wilkins' personal life. So far, they have struck a reasonably good balance, even though the concept of the decent cop who doesn't give his family enough priority is a very, very well-worn theme, which isn't handled with any great originality here. Overall, though, this is one of the better dramas based on a real life crime in the UK.

PS - I've now watched the third episode. Often, series of this kind fade after the first episode, but in this case, I thought the reverse was the case, and the story actually became stronger. The trial scenes were especially well done.