Several films have been called Quicksand. The 1950 movie which is the subject of this review is an American film noir. Now plenty of films are described as 'film noir' which don't really fit that description in a meaningful way. When it's applied to British films of the Fifties, for instance, the term often seems just to be a synonym for 'black and white movie drama'. But here we have a classic film noir situation - an everyman figure whose life goes into a downward spiral following his encounter with a femme fatale. 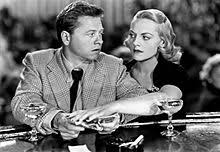 The everyman in this case is car mechanic Dan Brady. He's played by Mickey Rooney, who is by no means my favourite actor; here, however, even though cast against type, Rooney gives a very good performance. He borrows twenty dollars from the till at work, in order to take a new girlfriend called Vera (Jeanne Cagney, sister of Jimmy) out on a date. He intends to pay the money back, but soon his troubles multiply and he gets deeper and deeper into trouble. Hence the title of the film.

The screenwriter was Robert Smith, whose script is admirably taut; we could do with him writing some of today's TV shows and cutting out some of the padding. There are some nice touches, and a great performance by Peter Lorre as Nick Dramoshag, the villainous owner of a penny arcade. The resort setting (Santa Monica) gives the film plenty of atmosphere, and there are some good minor characters, including Vera's horrible landlady (the splendidly named Minerva Urecal). There's even that rarest of creatures in a film script, a thoroughly decent and competent lawyer.

The story isn't flawless, though. Dan behaves so stupidly at times that it's hard to sympathise with him. His treatment of the adoring Helen is especially reprehensible and difficult to understand. Helen is played by Barbara Bates, a beautiful woman who had a tragic life, cut short all too soon. I wasn't sure about the ending of the film, although in some ways it was satisfying. Not entirely in keeping with the film noir tradition, though. Overall, however, I found this movie a pretty gripping example of noir and it deserves to be better known.