Forgotten Book - Murder at the Pageant 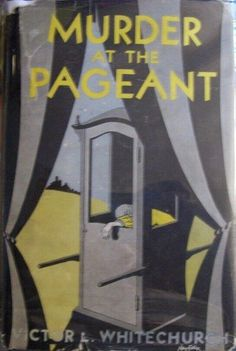 Murder at the Pageant was the penultimate novel of Victor Lorenzo Whitechurch (1868-1933) and was published three years before his death (my copy is the US edition, which came out a year later). By that time, Whitechurch's reputation as a detective writer was firmly established. His early railway-based short stories remain the work for which he is best known, but his first detective novel appeared in 1924 and he was one of the founder members of the Detection Club, contributing a chapter to The Floating Admiral.

This novel is typical by those of Whitechurch that I've read. The mystery is solidly constructed, the detective work sound, and the general tone (especially when the author, a Rural Dean, pokes gentle fun at members of the clergy) is agreeable and occasionally humorous. Everything is rather under-stated and very English (or at least very English in the way that people outside England tend to think of the English!)

The setting in and around a country house and small village contributes to the vintage atmosphere of the story. Not only is there a pageant, a sedan chair also features! A jewellery theft plays an important part in the story and this is, of course, a plot ingredient in the tradition of The Moonstone as well as many later Victorian mysteries. The plot is competently constructed and Whitechurch's lead detective, Superintendent Kinch, is hard-working and decent. Whitechurch was supposed to be one of the first crime writers to consult police officers in an attempt to make sure that his accounts of police work in his novels had a touch of authenticity.

Whitechurch wasn't really aiming, in novels like this, to break fresh ground in the genre. He wasn't a Sayers or a Christie, or even a Crofts or a Connington. His focus was on entertainment. His writing was of a higher quality than that of many other detective novelists of his time, and although I wouldn't claim that he was a master of heart-stopping tension - this story is simply too calmly told for that - they have considerable appeal . Especially in a pandemic, when light escapism has so much to commend it.

Martin, I really envy you for this copy. I think there is little opportunity to get another inscribed one in some years.

Whitechurch may have the distinction of having created the first vegetarian detective (Thorpe Hazell, in "Thrilling Stories of the Railway"). However, I don't know if his detective activities were influenced by his diet.

Elliot, thanks. As you know, your co-operation is something I really appreciate.

Jonathan O - it's interesting that Thorpe - who was also an exercise fanatic as I recall - was seen as eccentric in his day - now he would be trendy!